Steeped in history, rooted in the present.

Gump Hof in Fiè allo Sciliar dates back to medieval times. With documentary evidence going back as far as to 1546, Gump Hof is overlooking the southernmost part of the Isarco valley. Once upon a time it lay right on the north-south route crossing the Alps! It is worth bearing in mind that centuries ago travellers did not use the valley floor as their throughway but preferred the routes higher up.

Grapes have been cultivated at Gump Hof since ancient times. For centuries Gump Hof undertook mixed farming and supplied nearby Schloss Prösels with wine and other agricultural products. Oswald von Wolkenstein even referred to the area’s wines in one of his poems! In more modern times Gump Hof used to deliver its grapes to the local cooperative but Gump Hof has been producing and selling its own wines for more than a decade now. “Gump Hof has been in the same family for more than two hundred years,” explains owner Markus Prackwieser. “Historically wine was only one of its products. Concentrating on cultivating grapes and making wine is, relatively speaking, a fairly recent thing and still an ongoing process.” Indeed, some of Gump Hof’s remaining green pastures are still being converted into vineyards. As of the present day, five hectares are under cultivation, plus an additional two hectares of rented land. Markus has planted Pinot Noir grapevines next to the grounds of Schloss Prösels in 2019 – they make for a beautiful sight.

Gump Hof’s soils are mainly quartz-porphyry. Some sub zones consist of dolomite. With an angle inclination of 55 to 70 per cent, the Gump Hof terroir is not for the faint hearted! Situated at an altitude of 450 to 850 metres above sea level, the steep slopes are overlooking the southernmost part of the Isarco valley. Climate-wise, however, Gump Hof is closer to Bolzano. The southern afternoon wind Ora makes its appearance in the afternoon whereas after nightfall the Dolomites are sending falling winds that help aeration and achieve much-needed cooler temperatures during harvest time. “Conditions for getting healthy, richly aromatic fruit are ideal,” explains Markus.

Historically the two grape varieties cultivated at Gump Hof were Schiava and Pinot Bianco. Until 2000, Gump Hof used only the Pergola as a training system, but that has changed ever since. The winery has been expanded twice, once in 2012 and once in 2018. Carved into the rock and with bare rock on three sides, the cellars are beautiful from an aesthetic point of view, but Markus is happy with them for other reasons, too. “There’s a stable temperature year round,” he says. “Humidity levels are ideal for maturing wine in oak barrique and tonneau.” Markus is only using French oak for ageing in small barrels and acacia for larger ones. We also get a peek at the brand-new, yet to be inaugurated tasting room, also carved into the rock. 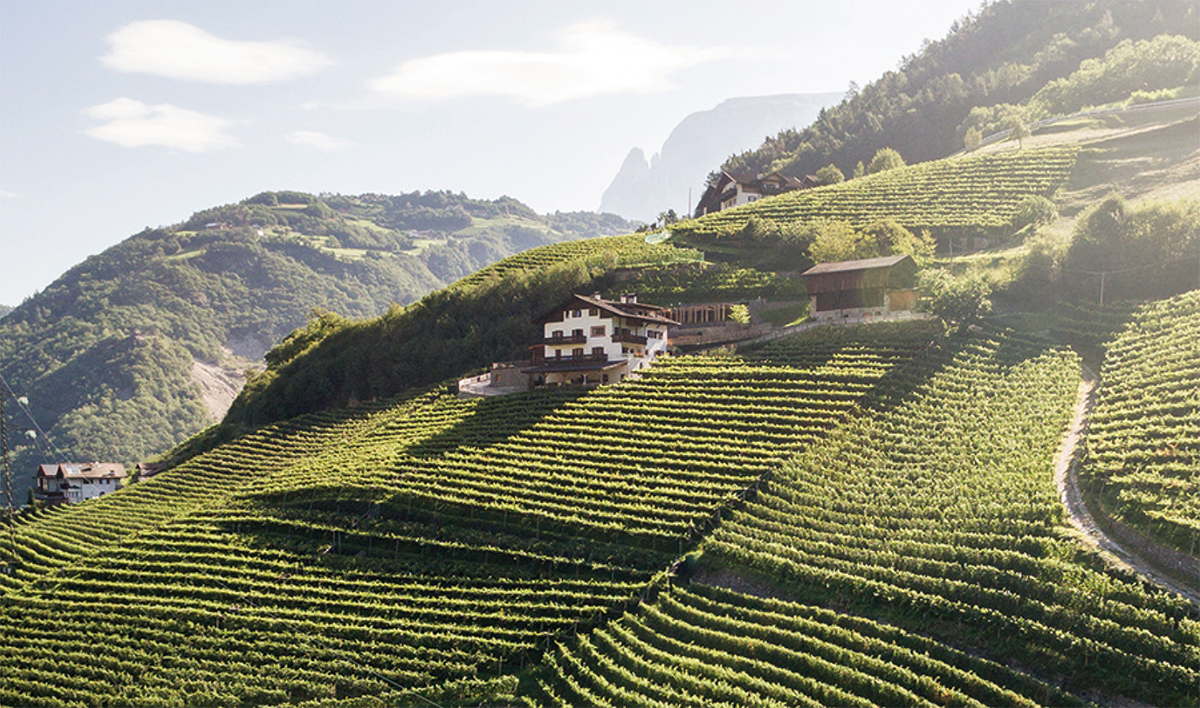 The Pinot Bianco Mediaevum 2018, produced in stainless steel, is fresh and typical of its grape varietal. As for the Pinot Bianco Praesulis, one third has been fermented and matured in tonneau. Offering a lovely combination of maturity and freshness, we like its chalky minerality and its nice salty finish. We also very much like the current vintages of Praesulis Sauvignon Blanc and the Praesulis Gewürztraminer. The Gewürztraminer is pleasantly lean and leaves no bitterness in the finish, making for a well-balanced, harmonious experience.

Only the grapes in the best vintages make it to the Renaissance line. Markus pours a 2015 Renaissance Pinot Bianco Riserva. The wine fermented in oak and spent another twelve months on the lees before being treated to one year in the bottle. It has great structure and an elegant mineral finish. The Renaissance Sauvignon Blanc has only been released twice so far, once in 2014 and once again in 2016. Markus is obviously happy with the result and so are we, feeling enchanted by its elegant floral aromas.

As for the reds, the 2018 Schiava Mediaevum from the classic line is juicy and fun to drink without being ordinary at all. “Very precise and to the point,” we all agree. The Praesulis Pinot Noir is fruit-driven yet elegant and then, of course, the 2016 Renaissance Pinot Noir Riserva is a different story altogether. To be officially released in October this year, the grapes underwent cold maceration for a full week, with forty per cent whole bunch fermentation. This was followed by another three to four weeks on the skins before malolactic fermentation in barrique. “This wine spent eighteen months  in oak and then another eighteen months in the bottle,” explains Markus. “It’s fully expressing the soils and the micro climate.” Indeed this Pinot Noir is elegant and complex, gifted with a fine tannin and a long persistent finish. We’re sure Oswald von Wolkenstein would have liked it just as much as we did!